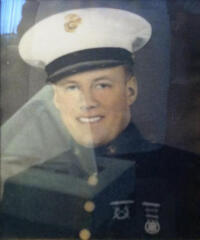 Floyd was born July 6, 1920, in Ford River, Mich., the son of William and Anna (Makosky) Krause.  Floyd enlisted in the United States Marine Corps in 1943 and served his country proudly during World War II.  He was united in marriage to Virginia Groleau on Nov. 17, 1945, in Escanaba.  Floyd was a longtime member of St.  Thomas the Apostle Catholic Church and was one of the 12 founding members of the St. Vincent dePaul Council, started in 1966.  He remained an active volunteer for the St.  Vincent dePaul Society for many years.  He also worked as a welder for the Harnischfeger Corporation for 32 years.  He loved the outdoors and was a lifelong lumberjack.  He was a wonderful husband, father and grandfather and will be dearly missed.

He was preceded in death by his parents; a sister, Margaret Wisbecky; and two brothers, Emil and Oscar.

The family will receive friends on Sunday, Oct. 23, from 2 to 4 p.m. at the Skradski-Boyce Funeral Home in Escanaba.  Mass of Christian Burial will be on Monday, Oct. 24, at 11 a.m. at St. Thomas the Apostle Catholic Church in Escanaba with Rev. Fr. Rick Courier officiating.  A luncheon will be served immediately following services in the fellowship hall.  Floyd will be laid to rest in the Holy Cross Catholic Cemetery.  Memorial contributions in Floyd’s name may be directed to the church.  For additional information or to leave the family a message of condolence, go to www.skradski-boycefuneralhomes.com.